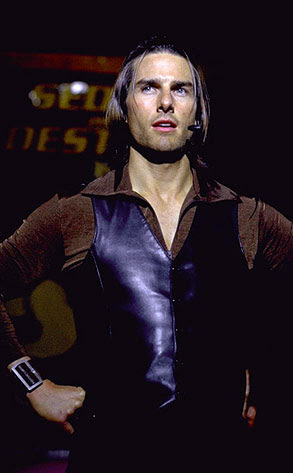 When a role is specifically written for an actor, the results usually turn out to be something great. This is because the writer will write to that actor’s particular strengths which help the actor create a character that is memorable and can be easily inhabited. That’s exactly what happened when writer/director Paul Thomas Anderson (PTA) wrote the character of Frank T.J. Mackey knowing Tom Cruise wanted to work with him. Tom Cruise was a fan of PTA’s prior movie Boogie Nights and was interested in meeting the director. The two met while Tom Cruise was filming Eyes Wide Shut and Paul Thomas Anderson visited him on the set.  The two got talking and got along with each other. They then agreed to try to work together. PTA wanted Tom Cruise to have a “goldmine for an actor to work with” and wrote the part of Frank T.J. Mackey for him.
Frank T.J. Mackey was inspired by Ross Jeffries, who was a motivational speaker whose topic was “How to Pick Up Women”. Frank T.J. Mackey, the character, was also a motivational speaker who taught seminars to men about how to pick up women. Mackey was an extreme chauvinist who talked in obscene language and constantly degraded women. Cruise was skeptical at first in taking the role, but then realized it was a great part and he was perfectly suited to play it.

Tom Cruise is, first and foremost, a great movie star. Cruise is a great movie star because prior to 2005 (when he jumped on Oprah’s couch and ranted about Scientology) almost everyone loved his movie star image and his face could sell movie tickets. He’s also a really strong actor who excels at playing cocky men who end up learning a lesson in life that helps make him become a better person. Think of his characters from movies like Top Gun, Rain Man, Born on the Fourth of July, A Few Good Men, Jerry Maguire and the list goes on. Cruise is definitely an actor who has type-casted himself in these types of role. He essentially plays a little bit different version of the Tom Cruise character in almost every one of his movies. PTA recognized that fact and wrote a character that essentially is the Tom Cruise character but to the utmost extreme, and gave the character a twist in that it delves into his painful past that may give cause to his extreme behavior.
I don’t know of a better case of casting an actor that already brings so much to the part by the nature of who that actor is. Everyone knows what to expect when they see a Tom Cruise movie, but they weren’t expecting the irony of the movie star playing up his playboy image. Los Angeles Times film critic Kenneth Turan said, “Mackey gives Cruise the chance to cut loose by doing amusing riffs on his charismatic superstar image. It's great fun, expertly written and performed, and all the more enjoyable because the self-parody element is unexpected”. (link)
But there was a lot more to Cruise’s performance than just playing up his movie star image, he had to perform in some of the most emotionally complex scenes of his career. There are two big scenes in the movie when Cruise has to be extremely vulnerable. The first occurs when Mackey is being interviewed by a female reporter and is questioned about his family history. The interviewer catches Mackey in a lie and Mackey stays silent for the rest of the interview. The camera stays on a close-up of Cruise’s face throughout the scene and we witness, on his face. his inability to confront the truth about his family. When asked by the interviewer what he’s doing, Cruise coldly replies, “I’m quietly judging you.”

The second big scene that demonstrates Cruises’ impressive acting chops happens near the end of the film when Mackey confronts his dying father on his deathbed. By this point we have learned that Frank T.J. Mackey’s real name is actually Jack Partridge and his father is Earl Partridge. We learned that Earl left his wife and son when his wife became deathly ill with cancer and his son had to take care of his dying mother while she waited for her husband’s phone call. This type of scene, where the long-lost son  visits his father on his deathbed, is a scene we have seen in countless other movies, but in Magnolia the scene doesn’t play out exactly the way we expect it to.
When Mackey first sees his father (who appears incapacitated because of the morphine he just took) he still holds him in the utmost contempt and doesn’t forgive him for leaving him and his mother when she got cancer. Mackey tries to hold back his emotion saying, “I'm not gonna cry for you…You can just fucking die you fuck, and I hope it hurts.” But Mackey does break down and begins uncontrollably crying and reveals his true feelings to himself and his father. The next time we see Mackey he’s crying even more profusely, pleading to his dying father, “Don't go away, you fucking asshole!”
The most amazing aspect about Cruise’s acting in this scene is the major transition his character goes through during this one scene. When the scene starts we are watching the same character we’ve seen throughout the rest of the movie; he’s angry, holding back his emotions and lashing out at people. But halfway thru the scene Cruise’s acting changes, he clenches his hands and lets loose all the buried emotion he’s been holding back for so long. Suddenly, we feel tremendous sympathy for this otherwise despicable character. While it’s not verbalized in the scene, one can sense what Cruise felt about his dying father all along: which was he loved him and envied him in a strange way. In a sense Frank T.J. Mackey became his father, a person who degrades women. While one might think, given his past history, that Mackey would become the exact opposite of his father. But Mackey ended up taking all his hatred of his father, buried that down deep inside him until he, hopelessly, became him. It’s one of the most touching and heartbreaking scenes I’ve ever seen on film.
For this part, Tom Cruise received the Golden Globe award for best supporting actor and received his third Oscar nomination. He was expected to win, come Oscar night, for best supporting actor. But lost out to Michael Caine for The Cider House Rules. Tom Cruise will best be remembered for being one of America’s biggest movie stars in 1980s and 90s, before he went “crazy” in the 2000s. But his gifts as an actor should not be overshadowed - as his performance as Frank T.J. Mackey was a performance that truly could not have been delivered by any other actor - and in my opinion is one of the greatest film performances of all time.
Posted by Scott at 3:15 PM